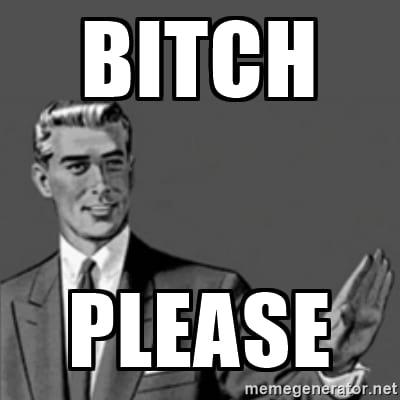 There’s something about the empowered woman who sets boundaries and makes rules that really pisses people off. I’ve been trying to figure out what it is for pretty much my whole life.

As a writer, I spend a lot of time doing research on random subjects that apply to what I’m writing about. I’m kind of like Tony Stark. I can make myself educated enough on any given topic that I can go interview an actual expert and publish a well-written, well-informed article about the subject the very next day. That’s what I do. It’s my job description, so I know a little bit about a lot of things.

So, when I encounter people who think of me as a know-it-all or a bitch, I have to wonder what glasses they’re looking through. Have they bothered to check their own mirror? Have they ever bothered to look up the word?

I’ll ignore the first definition of the word, which everyone already knows. The second one is what matters for the purpose of this discussion. “Bitch” is defined as: “a often offensive  :  a lewd or immoral woman often offensive  :  a malicious, spiteful, or overbearing woman —sometimes used as a generalized term of abuse.”

That’s what I’m talking about here, “abuse.” I know who I am. I’m smart and I’m strong. I know my own mind. While I may not know what I want, I know what’s right and what’s wrong. I stand up for those things and if I were a man, you’d tell me I was a stand up guy. You’d say I was reliable and dependable. You’d say I was a “good person.” But because I’m a woman, I don’t get that moniker. I get “bitch” instead.

Apparently, it’s “overbearing” to be the sort of person who calls someone out when you know that they’re not only wrong, they’re really, really wrong and it’s going to get them into serious trouble. It’s “malicious” and “spiteful” to demand that the people around you back up their arguments with facts. It’s “immoral” of me, as a woman, to demand that you, as a person, should step back and stop bullying someone.

The worst offender of name-calling in this situation though, isn’t men. I don’t get called a “bitch” by men, not to my face. It’s women. They disagree with me, they call me a bitch. They think I’m sticking “my nose in” and I’m a bitch. It’s horrifying.

I am many things politically. One of them is NOT a feminist, but that’s mostly because I don’t prefer to be associated with the women who wander around wearing vaginas for hats. That’s not my thing. What I am in favor of though, is equal treatment and ladies, we’re failing. We deserve so much better from each other.

What’s worse, is that this is a horrible example to set for our sons and daughters, who are supposed to be learning about how women should be treated from us. If you believe in empowering women, if you believe in standing up for yourself and for what’s right, why aren’t you out there taking this word back?

I think it’s past time for us to start.